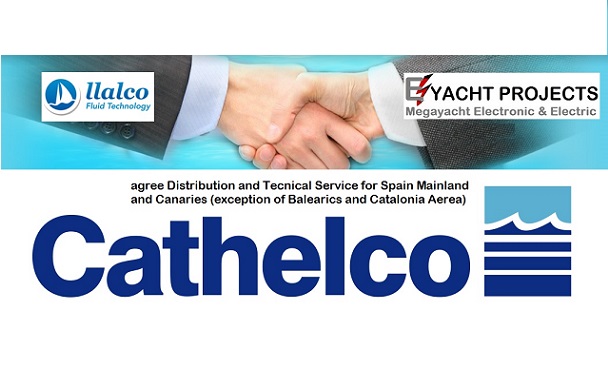 The Cathelco Mk I BWT ballast water treatment system has proved its effectiveness on a growing number of vessels operating worldwide since its introduction in 2014. Based on a combination of filtration and UV technology, the system operates in marine, brackish and fresh water. What’s more, it performs efficiently in the most challenging water conditions where there are high levels of silt. The system gained IMO Type Approval in early 2014 and continued by achieving U.S Coast Guard AMS certification a few months later. Technically advanced, energy efficient and occupying a small footprint, the system reliably eliminates organisms and pathogens.

ICCP The appearance and hull integrity of luxury yachts, whether built from steel or aluminium, can be seriously compromised by corrosion. Traditional methods of protection involve the use of sacrificial anodes which add extra weight and drag as well as spoiling the smooth lines of the craft. Sacrificial anodes also need to be replaced at regular intervals to remain effective. Cathelco Minitek and Alutek systems eliminate these problems using the most advanced impressed current cathodic protection (ICCP) technology. They have also developed systems which protect water jet tunnels on high speed leisure craft. The systems are specified by some of the world’s leading yacht designers and builders, and can be fitted to craft of 15 metres upwards..

Cathelco’s marine growth prevention systems are fitted on some of the most prestigious superyachts in the world. However, by miniaturising anodes and control panels, the same well proven technology is available to protect thousands of luxury yachts and cruisers.The Cathelco marine growth prevention system has proved to be an effective and reliable method of eliminating blockages caused by bio-fouling. Based on the electrolytic principle, providing continuous and reliable protection without the use of chemicals. A dual system combining pipework anti-fouling and corrosion suppression.A range of control panels and anodes to suit vessels of every size. Every system custom designed for its particular application ensuring greater effectiveness. Automatic operation – requires minimal attention and makes very little demands on crew time. Easy installation – anodes can be installed in seachests or strainers at newbuilding or retrofit. Environmentally friendly – does not involve the use of chlorine based chemicals or carcinogens. Approved by classification societies. The system usually consists of pairs of copper and aluminium anodes which are mounted in seachests or strainers and wired to a control panel. In the case of cupro-nickel pipework, a ferrous anode is used instead of the aluminium anode. In operation, the copper anode produces ions which are carried by the flow of seawater, creating an environment in which barnacles and mussels will not settle or multiply. By introducing copper ions in very small concentrations, around 2 parts per billion, the Cathelco system interrupts the settlement sequence of mussel and barnacle larvae. Instead of adhering to the surface of seachests, strainers and pipework, the larvae pass harmlessly through the cooling water system to the point of discharge. Without anti-fouling protection, pipes become encrusted with organisms leading to partial or total blockages which reduce the efficiency of the seawater cooling system. A dual action system The action of the copper ions is assisted by aluminium hydroxide created by the aluminium anodes which flocculates the released copper from the copper anodes. This highly gelatinous copper-aluminium hydroxide floc is carried throughout the system and tends to spread out into the slow moving areas closer to the pipe surfaces where marine larvae are most likely to settle. As a result, marine growth larvae do not settle, instead passing direct to discharge. At the same time, a cupro-aluminium film is built up on the internal surfaces of pipes to suppress corrosion. In this way, the system has a dual action protecting seawater pipework against bio-fouling and corrosion. Seachest or strainer mounted anodes When systems are installed at newbuilding, anodes are generally fitted in the seachests using special sleeves or flange mountings. Alternatively, if systems need to be installed prior to scheduled drydocking, the anodes can be mounted in the seawater strainers. This also simplifies replacement when anode renewal becomes necessary. In special cases, where the Cathelco system supersedes existing chemical based anti-fouling equipment, the anodes can be mounted in treatment (electrolysis) tanks in order to economise on the installation costs by utilising existing pipework. Steel pipework – protected by copper and aluminium anodes. Cupro-nickel pipework – protected by copper and ferrous anodes. Seachest mounted anodes – generally installed at newbuilding and are replaced at drydocking. Strainer mounted anodes – can be replaced at any time when the vessel is alongside. Electrolysis tanks – can be used to replace chemical systems or in specialised applications where seachest or strainer mounting is not possible. Environmentally friendly – does not use chemicals. Generally operates with copper concentrations of just 2 parts per billion.